Over the years, the sport of boxing has seen some truly astonishing boxers who have gone down in history as being legends.

Names such as Muhammad Ali, Mike Tyson, Lennox Lewis, George Foreman, Frank Bruno, Nigel Benn, Ricky Hatton, Manny Pacquiao, Sir Henry Cooper, Floyd Mayweather Jnr, Wladimir and Vitaly Klitschko, Rocky Marciano, and plenty more besides, will all go down in history as being amongst the best fighters on the planet.

Right now, however, there are plenty of exciting talents to look out for, and with names like Tyson Fury, Deontay Wilder, Triple G, Canelo Alvarez, Andy Ruiz, and many more, it’s certainly a great time to be a boxing fan.

You may have noticed that there is a name we missed off the list just now, and that name is Anthony Joshua.

Anthony Joshua, or AJ, as he is known, is a beast of a boxer who looks as if he has been chiseled out of stone.

Because of his natural boxing ability, his charisma, and his looks, he is also one of the most marketable boxers in the industry today, so he’s not shy of a buck or two.

Here’s a look at Anthony Joshua’s net worth.

Who Is Anthony Joshua?

Before we can talk money and look at Anthony Joshua’s net worth, we first need to make sure you know exactly whom we’re talking about, despite the fact that he is virtually impossible to miss.

AJ is an English boxer, who, as of this writing, is currently ranked 3rd in the world in the Heavyweight division.

Anthony Joshua stands at 6ft 6 inches in height and typically weighs in at anything from 240 – 255 pounds when he fights.

Make no mistake about it, there is not an ounce of fat on his frame so this weight is all muscle.

Anthony Joshua is considered by many to be the future of the sport of boxing, and despite suffering a surprising loss to Andy Ruiz Jnr not too long ago, he instantly took the rematch, defeated Ruiz in convincing fashion, and took back his belts.

AJ is currently a two-time unified Heavyweight Champion, having held the IBO, WBA, WBO, and IBF titles since December of 2019.

AJ is a former Olympic Gold Medallist, having represented Great Britain at the 2012 Olympic Games.

In 2013 he turned pro and just one year later he was named Prospect of the Year by Ring Magazine. He certainly lived up to this title.

AJ went on to climb the rankings, defeating opponent after opponent in emphatic fashion.

Despite fighting capable fighters, including Dillian Whyte, AJ’s biggest fight was against the legendary Wladimir Klitschko, of which he was victorious.

AJ is currently sponsored by some very big names and is very marketable because of his talent, as well as his good looks, and his imposing physique.

Furthermore, he will soon be fighting the current number 1 Heavyweight in the world, Tyson Fury, in a boxing match that fans have been clambering for, for years.

Because of all of this, you can soon expect Anthony Joshua’s net worth to increase dramatically.

Before we can talk about the future of boxing, we need to go back in time to learn more about this highly talented boxer from the UK.

Anthony Oluwafemi Olaseni Joshua was born on the 15th of October, 1989, in Watford, Hertfordshire, England.

As a youngster, AJ was actually raised in Nigeria where he spent his early years at a Nigerian boarding school at the Mayflower School.

Sadly, his parents got divorced when he was just 12 years of age, and subsequently, he returned back to the UK, where he attended Kings Langley Secondary School.

AJ grew up in a fairly rough council estate known as the Meriden Estate, in Garston, Hertfordshire.

Because of where he grew up, along with his unusually large size, AJ found himself getting in trouble as a youngster.

Nothing major, but he would often get into fights and would socialize with the wrong crowds a lot.

Despite being a mischievous youngster, AJ was a bright student and he did well at school and showed an interest in chess of all things.

From a young age, it was clear that AJ was gifted athletically as he excelled at football, or soccer as it is also known and athletics.

By the time he was a teenager he was much taller than average and was carrying a decent amount of muscle mass on his frame.

By the time he reached his third year in secondary school (year 9), he broke his school’s record for the 100 meters sprint, clocking a time of 11.6 seconds, which in itself is incredibly impressive.

He went on to leave school and started work as a bricklayer after leaving school, and he actually didn’t take up boxing until he was 18 years of age, so he was very late to the game.

In 2007, when he was 18 years of age, AJ took up boxing after his cousin suggested that he take it up as a result of his size, athletic ability, and the fact that he clearly knew how to handle himself and fight.

He began boxing at a boxing gym in North London known as Finchley ABC, which was home to Derek Chisora, another pro heavyweight boxer.

He went on to win numerous competitions, and despite being young and strapped for cash, he actually turned down an offer of $60,000 to turn professional after just 18 fights.

He went on to state that turning down the money was easy, as he wanted to ‘win medals, not make money’.

He continued to dominate the amateur rankings and consequently, his success earned him a place on the 2012 Olympic GB Boxing Team.

Later that same year he became an amateur champion in the UK.

In October of 2011, AJ was named as ‘Amateur Boxer of the Year’ by the Boxing Writer’s Club of Great Britain.

For any athlete in any discipline, representing your country at the Olympic Games is one of the greatest honors you could ever wish for.

Simply qualifying for the Olympic squad puts you in an elite category, but for AJ and his boxing, qualifying just wasn’t enough.

He stated he wanted to win medals and as a result, he set his sights high.

At the 2012 London Olympics, AJ was still a novice, yet this didn’t phase him one bit.

He had an incredibly tough draw, but again, this didn’t worry him in the slightest.

In his opening bout, he was drawn against the AIBA 4th ranked fighter in the world.

The bout was closely contested and after going the distance, AJ was given the decision in controversial fashion, as many believed that he should have lost.

Nevertheless, he was victorious and next fought Beijing silver medallist Zhang Zhilei, who was actually taller than 6ft 6 AJ.

Despite the slight disadvantage in reach, AJ dropped his opponent in the middle round and would go on to win the bout.

This was special because it meant that, at the very least, AJ was guaranteed a bronze medal, but that wasn’t enough, he set his sights on gold instead.

In the next fight, AJ was once again the shorter fighter, giving up 3 inches to his opponent Ivan Dychko.

Despite this, AJ won and went on to earn a place in the final, where he would go up against Italian Roman Cammarelle, who was a reigning Olympic champ.

AJ, who had previously defeated Cammarelle, was actually behind for the first couple of rounds, though in the third he turned things around and dominated, and was given the decision, which some boxing experts criticized and claimed it was a ‘home decision’ as AJ was from the UK.

Despite this, he was now an Olympic Gold Medallist and in 2013 was awarded an MBE. 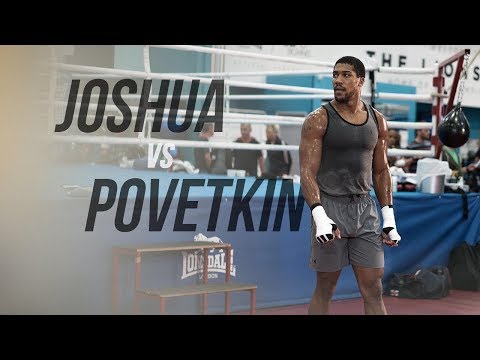 He debuted at the 02 arenas in October of that year, where he won by TKO against Emanuele Leo in the very first round.

In his next fight, in the ‘Steel City’ of Sheffield, AJ was once again victorious, this time against Paul Butlin. The ref stopped the fight as he was worried Butlin was taking too much punishment.

AJ would go on to fight several more times over the next few years, until 2015 where it was announced that he would battle for the vacant Commonwealth Heavyweight title at London’s O2 Arena.

AJ defeated Gary Cornish in just 90 seconds, claiming the title and finally being taken seriously as a big-time player.

Now, fans wanted to see the man-mountain tested, and so boxing promoter Eddie Hearn, announced that AJ would next do battle with undefeated heavyweight British boxer, Dillian Whyte.

AJ put his title on the line whilst battling for the vacant British title.

This was AJ’s biggest fight so far and was the main event on Sky Box Office.

Whyte had actually defeated AJ as an amateur years before, and so fans were eager to see the two now pros go head to head.

AJ suffered his first real professional scare early on in the fight, as Whyte really took it to him, but AJ just proved to be too powerful, as he shook Whyte with a right hook in the 7th round, before finishing him with a powerful uppercut.

Now AJ was said to be making big money, so you can see why Anthony Joshua’s net worth is such a key talking point as he scooped more than £3 Million for the Whyte fight.

He would go on to defeat Charles Martin, Dominic Breazeale, and Eric Molina over the next year, though now fans were getting annoyed as they felt he was ducking big names and taking easy fights.

Fans were hoping for a Tyson Fury fight, although when it was announced that AJ would go up against boxing legend Wladimir Klitschko, fans were very excited.

The two fought very cautiously early on, though, in the 5th, AJ threw a flurry of punches at Wladimir and knocked him to the canvas.

Wladimir was able to get back to his feet, and the fight continued.

Klitschko was now annoyed and took control after this, giving AJ his largest test to date. For the first time, AJ looked vulnerable and absorbed numerous shots before being knocked down by Wladimir.

AJ beat the count and the two fighters once again started to play it safe.

In the 11th round, AJ knew he needed to put his opponent away and so landed a clean uppercut that put Wladimir down, who got back up, only to absorb more shots before the ref stopped the match.

AJ had beaten one of the greatest fighters to ever live.

He would go on to fight 4 more times, including suffering his first loss to Mexican Andy Ruiz Jnr, whom many expected AK to dominate, due to his ‘out of shape’ physique.

To AJ’s credit, he took the rematch right away and dominated Ruiz in the rematch.

Finally, the Tyson Fury fight looks set to happen, which many predict will break records and earn both fighters an enormous amount of money.

Okay, so, now that you’re all caught up, let’s now take a look at the net worth of Anthony Joshua.

Right now, his net worth is estimated to be around $80 Million, of which nearly $19 million came from the Wladimir Klitschko fight, and $35 Million from the Ruiz Jnr rematch.

If the Tyson Fury fight does indeed go ahead, you can expect his net worth to increase exponentially, as the fight will be huge.