The US has created some huge names in the entertainment industry, including the man we’re going to be looking at today – Steve Harvey, when we provide you with numerous Steve Harvey quotes.

Steve Harvey is incredibly well known in the entertainment industry, primarily for being a comedian and TV presenter.

What many people fail to realize is that Steve also happens to be a very capable businessman and entrepreneur, who has numerous business ventures under his belt and a vast resume.

Steve Harvey is not only a very talented entertainer, comedian, presenter, and businessman, he is also a very popular public figure who has an enormous following, especially in the US.

Before we list several inspirational Steve Harvey quotes, we’ll first take a more detailed look at who he is and how he came to be.

Who Is Steve Harvey?

Broderick Stephen Harvey is a US businessman, entertainer, and TV presenter.

He hosts shows such as Family Feud, Miss Universe, Fox’s New Year’s Eve, Celebrity Family Feud, and The Steve Harvey Show and also listed one of the richest comedians in the world.

He began his career as a stand-up comic back in the 1980s and would perform on and off until 2012 when he performed his final stand-up comedy show.

As if his presenting resume and stand up comedy wasn’t impressive enough, he has also written a number of books, including a best-seller entitled ‘Act Like a Lady, Think Like a Man’.

He founded Steve Harvey Global in 2017, which is an entertainment company that is home to his own company East 112.

His first name, Broderick, was given to him by his parents after Broderick Crawford from the TV show Highway Patrol.

He moved to Cleveland, Ohio with his family, where they resided on East 112th street (hence the name of his company ‘East 112’).

In 2015, the street was actually renamed Steve Harvey’s way.

In 1974 he graduated from Glenville High School before attending Kent State University and West Virginia University.

He is a member of the Omega Psi Phi Fraternity.

After leaving university, Steve had many jobs, including an insurance salesman, a carpet cleaner, a mailman, and even a boxer.

In the 1980s, he was so determined to make it as a comic that he was homeless for 3 years and slept in his car whenever he was performing gigs that didn’t include accommodation at a hotel.

Life In Front Of The Camera:

After going on to become a successful comedian, Steve Harvey landed a starring role on the ABC show ‘Me and the Boys’ back in 1994.

Sadly, the show didn’t catch on.

Harvey is currently the host of the Steve Harvey Morning Show, along with Family Feud, which he took over as presenter in 2010.

Since he took over, the show has grown in popularity, thanks in part to his reactions to some of the answers given on the show. 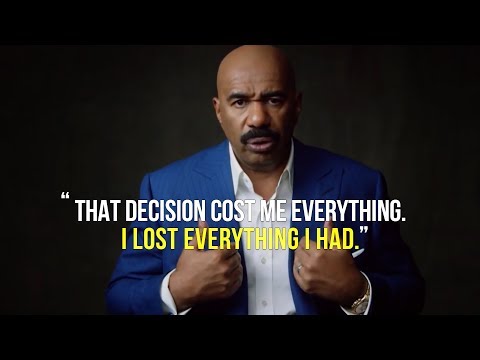 In 2017, Harvey amalgamated all of his business ventures together under Steve Harvey Global, and he is currently one of the most in-demand names in the entertainment industry.

Here Is Some Of The Steve Harvey Quotes:

1. “You’ve got to be in a bad relationship to really understand what a great one is.” – Steve Harvey

2. “I’m not a doctor. I just have a tremendous amount of common sense.” – Steve Harvey

3. “I think that we, as the African-American men in hip hop, have a greater responsibility because we have the ears of so many millions of our young people. And they listenin’.” – Steve Harvey

5. “I’m a comedian first. I’ve learned how to act. I just draw on life experiences and that’s how I’ve learned. I didn’t take classes or anything. I don’t need no classroom.” – Steve Harvey

6. “I had, like, 11jobs. I’ve been fired 11 times! ‘Cause I’m not cut for that. You know, I was a great employee, man. Everybody loved me coming to work – I’m singing, telling’ jokes on the assembly line. I was miserable, man. I was dying. I was dying.” – Steve Harvey

8. “You can take lessons to become almost anything: flying lessons, piano lessons, skydiving lessons, acting lessons, race car driving lessons, singing lessons. But there’s no class for comedy. You have to be born with it. God has to give you this gift.” – Steve Harvey

9. “I sit my three sons down and say, ‘Listen to me. When the police stop you, immediately comply. Don’t walk away, don’t smart-mouth; get your hands up, and get down on the ground.’ If you’re not black, you might not have to have that conversation, but I go over and over it with them because I don’t want that phone call.” – Steve Harvey

10. “The first time I saw my wife, Marjorie, I was doing stand-up in Memphis, and she was sitting in the front row. Afterward, I walked up and said, ‘Ma’am, I’m going to marry you one day.’ and 15 years later. I did.” – Steve Harvey

11. “All men can and will change. But there’s only one woman we’re going to change for.” – Steve Harvey

12. “I’m just a living witness that you can be an imperfect soldier and still be in the army fighting for God Almighty. Don’t you think you got to be perfect ’cause I ain’t.” – Steve Harvey

13. “If a man loves you… he’s willing to profess it. He’ll give you a title after a while. You’re going to be his lady, his woman, his fiancee, his wife, his baby’s mama, something.” – Steve Harvey

14. “You can’t go forward and backward at the same time.” – Steve Harvey

15. “Women are the real reason we get up every day. I’m talking about real men. If there were no women, I would not even have the bathe, because why would I care? These are gays I’m hanging with. I wake up for a woman every day of my life to make it happen for her.” – Steve Harvey

16. “A guy that’s really serious about you, he’s gotta be talking to you, he’s gotta want to have one-on-one, in-your-face interaction. That’s how we are.” – Steve Harvey

17. “Failure is a great teacher, and I think when you make mistakes and you recover from them and you treat them as valuable learning experiences, then you’ve got something to share.” – Steve Harvey

18. “I’m going to take this God-given of being funny, and I’m going to spread it out like peanut butter on everything I do.” – Steve Harvey

19. “One of the biggest misconceptions that a woman has is that a man has to accept her the way she is. No, we don’t. I don’t know who told you that. We like the bright and shiny. If you stop wearing the makeup, stop putting on nail polish, stop wearing high heels, you’ll lose us.” – Steve Harvey

20. “God lets you be successful because he trusts you that you will do the right thing with it. Now, does he get disappointed often? All the time, because people get there and they forget how they got it.” – Steve Harvey

21. “My mother was a Sunday school teacher. So I am a byproduct of prayer. My mom just kept on praying for her son.” – Steve Harvey

22. “How can smart women be so stupid about men sometimes? Lack of knowledge. It’s what men have kept secret for so long.” – Steve Harvey

23. “The Problem is, women have stopped setting the bar high.” – Steve Harvey

24. “You have nothing if you’re texting a guy in a relationship. We can text women a minute. We can text it and push ‘reply all.’. I mean. since we’re lying, we might as well lie to everybody.” – Steve Harvey

25. “Hip-hop is a beautiful thing. I think that the music genre itself has created more millionaires than any other music genre before it, especially in our community.” – Steve Harvey